The brightest fluorescent material in history is born

Fluorescent dyes are organic compounds that absorb light of a certain wavelength and emit light of another wavelength. They play an important role in the fields of biomarking and solar technology. Traditional fluorescent dyes emit light in a liquid state, but when they are made into solid materials, due to the interaction between fluorescent molecules, almost no dye can maintain its original excellent luminescence performance, which limits its application and conversion.

A research team led by Professor Flood from Indiana University and Professor Laursen from the University of Copenhagen in Denmark found a solution to this problem that has plagued scientists for 150 years. By mixing the fluorescent dye with a colorless solution containing a macrocyclic compound-cyanostar, it solidifies to form a small molecule ion isolation lattice (SMILES) to prevent the interaction between fluorescent molecules, which perfectly combines the optical properties of the dye The properties are reproduced in solid materials, creating the brightest fluorescent material ever. 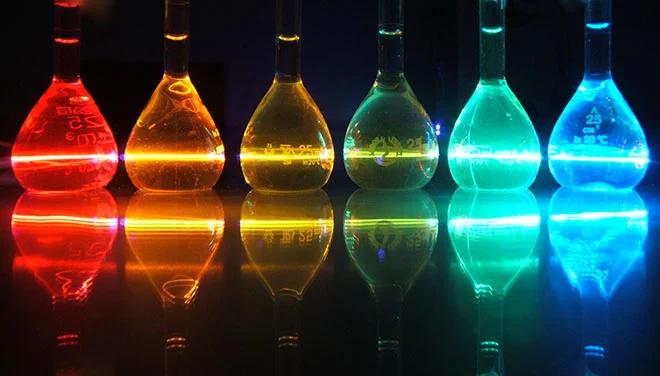 Fluorescence is very important to many technologies in the optical field (such as OLED). A large number of fluorescent materials are prepared by mixing and matching ionic structural units to control optical properties, including the revolutionary lead halide perovskite. Fluorescence is also easy to see in many dye molecules, which show bright luminescence in dilute solutions.

Although more than 100,000 fluorescent dyes are known to exist, there is almost no dye that can match and design luminescent materials in a predictable way. The solid material molecules converted from them are closely arranged and interfere with each other, resulting in fluorescence quenching and electrons. Coupling problem. Moreover, the color of the dye will change after being converted into a solid state, and the quantum efficiency will also decrease.

To make high-performance fluorescent dyes into solid-state fluorescent materials with excellent optical properties, avoiding coupling and emission quenching is the key. In previous work, many strategies to circumvent quenching rely on the spatial isolation of fluorophores. Scientists use cationic dyes and large anions to co-assemble (co-assembly), although optical properties can be replicated, but they cannot achieve the purpose of designing materials according to needs. 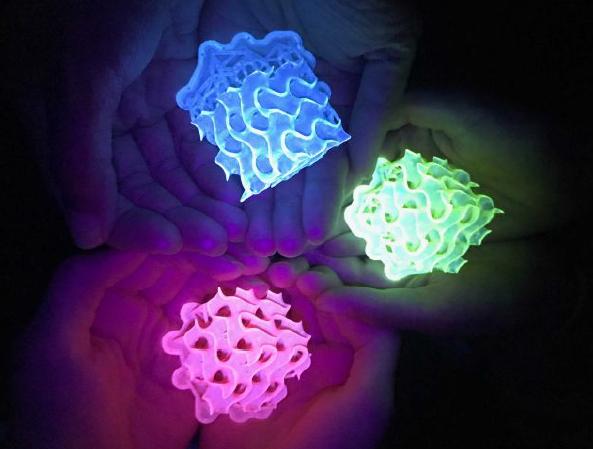 To solve this problem, the research team of Professor Flood and Professor Laursen used a cyclic molecule called cyanostar to separate the positively charged fluorescent dye molecules and their counter anions. The cyanostar molecules are like Like donuts, the counter anion is wrapped in the hollow pores, and the cationic dye is located outside. The researchers used a variety of commercial dyes to verify the universal applicability of the SMILES material, and found that the characteristics of cyanostar enable it to easily accommodate almost any cationic dye and perfectly replicate the original luminescent properties. Although previous research has developed a method of using macrocyclic molecules to separate dyes, it relies on colored macrocyclic rings to complete this work, and the optical properties of liquid dyes cannot be perfectly reproduced. In the work of Professor Flood and Professor Laursen, the innovation is that the material crystallization simultaneously produces the spatial and electronic isolation of the fluorophore, and makes it possible to use cationic dyes to rationally design, understand and discover advanced optical materials, thereby seamlessly planning from molecules to Targeting optical properties of the material.

SMILES materials are the first type of "plug-and-play" optical materials composed of fluorescent dyes. Dyes can be directly used in SMILES materials without optimization or adjustment. Professor Flood said: "We can now manufacture more of this advanced optical material through design instead of trial and error. This is the power of this material."

SMILES materials are currently known fluorescent materials with the highest brightness per unit volume. One of its potential applications is to help autonomous vehicles determine their position on the road. The vehicle emits light to an object coded with SMILES material on the side of the road, receives the returned signal, and obtains location information. In addition, SMILES materials can also be used in solar cells, solid-state lasers, medical diagnosis, biomarkers, and 3D displays.